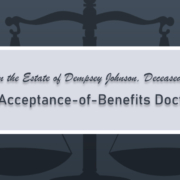 In February of 2021, the Texas Supreme Court heard arguments concerning whether a beneficiary of a will has standing to contest the will despite having already accepted benefits under it.  In the case, the contestant argued that the “acceptance-of-benefits” doctrine did not bar her claim because she had not accepted all her benefits (under the will or via intestacy), and she therefore retained her standing to challenge the will.  In making this argument, the contestant relied on the previous case of Holcomb v. Holcomb, which provided that a contestant may challenge a will if the benefits she accepted are worth less than those to which she is entitled under the challenged will or intestate laws.[1]  The Court in Johnson, however, overturned Holcomb and expressly denied contestants the right to take partial benefits under a will while simultaneously bringing a challenge to its validity.  The Johnson holding attempted to emphasize that the doctrine enforces the terms of the will and its bequests, not just the value conferred on each beneficiary.

To contest any will, a contestant must have standing as an interested party that is not barred by an affirmative defense.  One such affirmative defense is the acceptance-of-benefits doctrine.  If the will proponent can show that the contestant accepted benefits, the contestant bears the burden of rebutting that claim.  As the Johnson court explained, “[e]quity does not permit the beneficiary of a will to grasp benefits under the will with one hand while attempting to nullify it with the other.”  Thus, a beneficiary is estopped from bringing suit to challenge a will if and when they voluntarily accept any benefit under the will, unless the contest is consistent with the claim that the will is invalid.  It should be noted, then, that if a beneficiary is entitled to some benefit outside the will, accepting such a benefit does not, according to Johnson, preclude that beneficiary from bringing a contest.  In other words, if a beneficiary accepts some asset to which they would otherwise be entitled under intestacy, for example, their actions should not be inconsistent with contesting the will, so the contest should be allowed.  The Johnson court goes even further and says that accepting something that one would not have legal entitlement to without the bequest cannot be consistent with contesting a will and is thus barred by the acceptance-of-benefits doctrine.[2]  Additionally, the acceptance-of-benefits doctrine requires voluntary acceptance of a benefit.  In this way, the beneficiaries are effectively given a choice: they can accept a bequest, implicitly accepting the will’s validity, or they can reject the bequest and bring a contest.  There is no option for both.  The Johnson court, however, did not elaborate on when an acceptance of benefits is voluntary.

In Johnson one of the decedent’s daughters, Tia MacNerland, was bequeathed a mutual fund account under the will.  Importantly, MacNerland would not have been entitled to that account but for the will.  However, the total amount to which MacNerland was entitled under the will was substantially less than what she would have been entitled to if the decedent had died intestate.  After voluntarily receiving the mutual fund account, MacNerland contested the will’s validity, claiming that her father lacked testamentary capacity.  The executor of the estate (another of the decedent’s daughters) successfully argued that the acceptance-of-benefits doctrine applied because MacNerland had already benefitted from the will by accepting the mutual fund account, and the trial court dismissed MacNerland’s contest for lack of standing.

The appellate court, however, reversed the trial court’s holding.  Citing Holcomb, it held that the contest was consistent with the acceptance of the mutual fund account and could therefore be brought if the benefits accepted were worth less than those to which MacNerland was entitled under the will or intestacy laws (which they were).

The Texas Supreme Court, however, did not agree with MacNerland and elected to overturn Holcomb.  It held that, because MacNerland accepted the mutual fund account voluntarily, the acceptance-of-benefits doctrine should apply.  This shifted the burden to MacNerland, to show that her acceptance of the mutual fund account—which she admitted was the result of the will and nothing more—was consistent with also invalidating the will.  But since MacNerland had no legal right to the mutual fund account other than through the will, she could not show the requisite consistency needed to maintain the contest.  According to the Court, “a beneficiary must firmly plant herself on the side of the will’s validity or invalidity and accept the consequences of that election.”  The Texas Supreme Court ultimately agreed with the trial court and dismissed the case for lack of standing under the acceptance-of-benefits doctrine.

Ultimately, the Texas Supreme Court decided that a beneficiary cannot take through a will they also seek to invalidate.  Such a result would be inconsistent with the laws surrounding effective wills.  A beneficiary “must adopt the whole contents of the instrument, so far as it concerns [her].”  Thus, as a general rule, the voluntary acceptance of a benefit through a bequest precludes a beneficiary from bringing a will contest under the acceptance-of-benefits doctrine.

Matthew Griffeth is a clerk at FGHW. Mr. Griffeth is a 2022 candidate for a Juris Doctor at SMU Dedman School of Law, where he is the Managing Editor for the International Law Review Association’s Year in Review publication.  He holds a B.A. in history from the University of North Texas.

Requirements for Trial by Special Judge 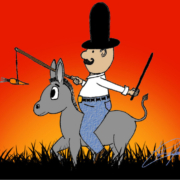 The Texas Probate Process for a Valid Will 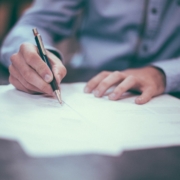 How to Probate the Copy of a Lost Will

This site uses cookies. By continuing to browse the site, you are agreeing to our use of cookies.

We may request cookies to be set on your device. We use cookies to let us know when you visit our websites, how you interact with us, to enrich your user experience, and to customize your relationship with our website.

Click on the different category headings to find out more. You can also change some of your preferences. Note that blocking some types of cookies may impact your experience on our websites and the services we are able to offer.

These cookies are strictly necessary to provide you with services available through our website and to use some of its features.

Because these cookies are strictly necessary to deliver the website, refuseing them will have impact how our site functions. You always can block or delete cookies by changing your browser settings and force blocking all cookies on this website. But this will always prompt you to accept/refuse cookies when revisiting our site.

We fully respect if you want to refuse cookies but to avoid asking you again and again kindly allow us to store a cookie for that. You are free to opt out any time or opt in for other cookies to get a better experience. If you refuse cookies we will remove all set cookies in our domain.

We provide you with a list of stored cookies on your computer in our domain so you can check what we stored. Due to security reasons we are not able to show or modify cookies from other domains. You can check these in your browser security settings.

We also use different external services like Google Webfonts, Google Maps, and external Video providers. Since these providers may collect personal data like your IP address we allow you to block them here. Please be aware that this might heavily reduce the functionality and appearance of our site. Changes will take effect once you reload the page.